I have been a chai fanatic since I can remember. Chai lattes, chai tea, chai on ice, chai chai chai. But I discovered my favorite chai when I began frequenting a local Indian restaurant in my neighborhood called Lotus. From then on, the overly sweetened chai lattés from Starbucks did not make the cut. I craved the spicy, cinnamon and cardamom accented masala chai that was poured into a petite glass, forcing me to relish every last sip. Therefore, you can only imagine my enthusiasm when I realized I was going to India, the mecca of all chai that ever was or ever will be phenomenal. In short, when I started my day yesterday by drinking about 5 sips of authentic Indian chai from a vendor on the street, to say that I felt fulfilled in that moment is the understatement of the century.

20 minutes after the most memorable chai of my life, I found myself lost on a rickshaw that had no idea as to where or what Guria’s childrens’ center was. This was my first practice of patience, because there was nothing I could do to change the situation and I was certainly not familiar with the nameless streets of Varanasi. Once the rickshaw driver and I were sufficiently lost in the opposite direction of the center, I was informed that it was a Muslim holiday, about which Ajeet Ji had forgotten to inform Emma. Since the children at the center are all Muslim, the center was closed for the day. Although I felt a pang of disappointment upon hearing this news, I did not let it show. Rather, I decided that the only way to make it India, especially at Guria, is to go with the flow.

Luckily, I was able to use the time to buy a bike for work, (necessary because Guria’s center is about 30 minutes away and the office is about 45 minutes away from my homestay) which was constructed by hand in front of my eyes. I was later told that ONLY being hit by one rickshaw on the bike ride home was quite impressive.

After meeting up with Kelly (another intern at Guria originally from Boston) and Emma, we explored the alleyways of Varanasi and spent almost an hour attempting to locate the reputable Babba Lassi, where I devoured a coconut lassi upon arriving. We sat and spoke with the owner, who hand made each lassi freshly. The lassi joint, a touristy destination during peak touristy months, had quotes from people all over the world lining the walls. The quotes were in many different languages, spanned decades, and were often hilarious. However, my favorite quote was, “The world is a book, and those who do not travel read only a page!” I knew I had landed myself in the right place in that moment.

Later that evening, we arrived at the “boat school,” one of Guria’s establishments on the Ganga (Ganges River) where I proceeded to teach English to the students on the rooftop of a boat. Children came on their own accord and eager to learn. However, we did not begin teaching until an hour after the lesson was originally scheduled. I then understood that stringent time schedules and organized lesson plans were not part of the package deal of Guria or India in a general sense.

Remaining patient is the singular most important asset in India to me thus far. And now, after two full days at the children’s center, perpetual patience has not only proved to be crucial for my own mental health, but also necessary in aiding the children’s learning processes and ultimate happiness to the best of my ability.

Last night after work, I took a sunset boat ride on the Ganga to watch a Hindi ceremony performed each night called the Ganga Aarti. Brahmans dance and sing with fire in their hands and put Shiva, one of the main deities of Hinduism, to sleep. This was not only incredible to watch, with a full moon to boot, but also a relief from the extreme heat and hectic day.

Although the touristy and not so touristy adventures are fun, the past few days of work at the center and the office have been a whirlwind I could not have predicted with any amount of research prior to my arrival.

More on that later… 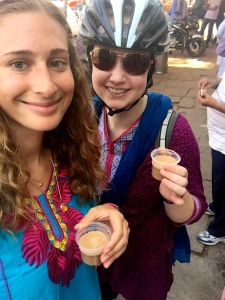 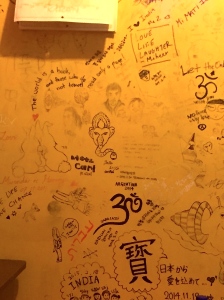 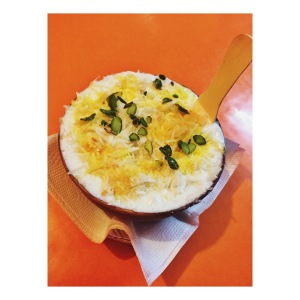 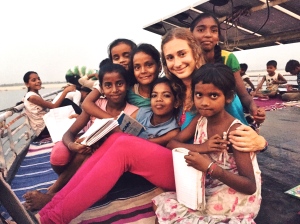 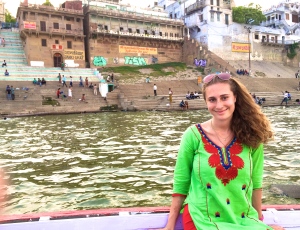 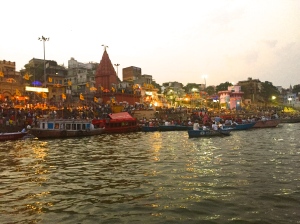 1 thought on “Patience is a Virtue”